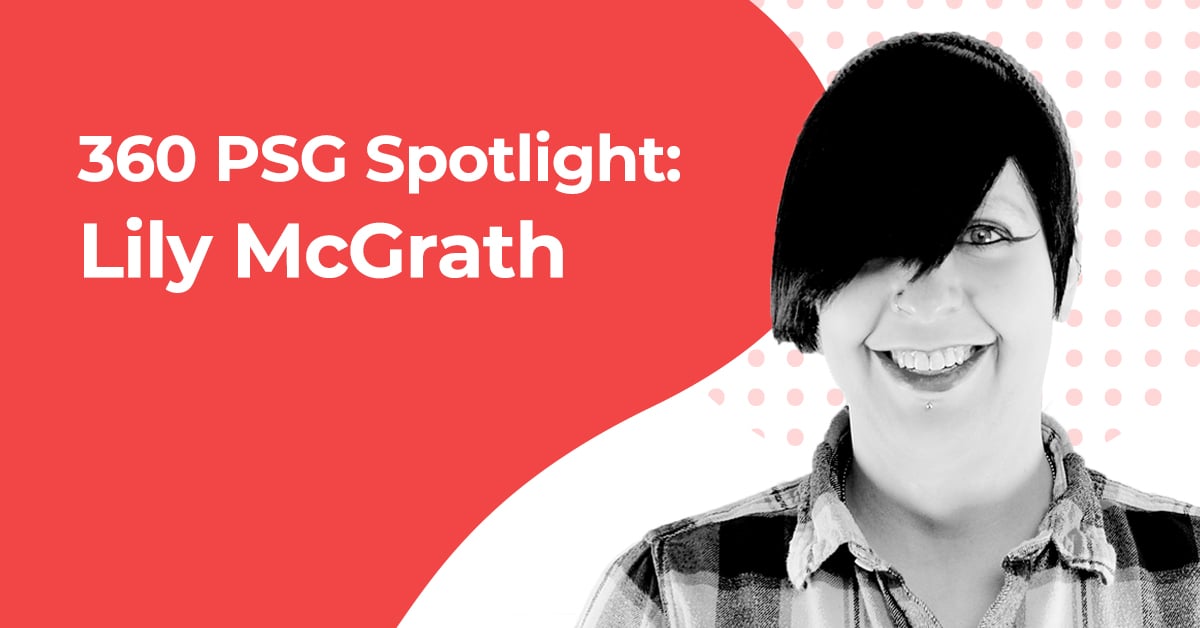 Lily McGrath may have started with 360PSG as a support technician, but in her more than four years with the company, she’s worn multiple hats, including SEO analyst and social media manager—which is her current position.

A talented graduate of University at Buffalo who majored in graphic design and received a certificate in game studies, Lily splits her work days between client outreach and graphic creation.

“My mornings are typically dedicated to communicating with clients. I have a number of them with major campaigns, and I always want to make sure we stay up to date on the content they would like to see in their ads and on their social media. My afternoons are allocated to graphic creation, scheduling posts and making sure that the ads are performing as needed,” Lily said when describing her daily routine.

The chance to create graphics for such a wide variety of clients is easily the favorite part of her day.

“I love graphic creation. Having the chance to express my creativity is a huge advantage of my position,” she said.

Lily came to 360 PSG after completing a college internship with another local company. Her interest in digital media is what initially attracted her to 360 PSG.

“360 PSG was looking for a support tech, with the chance at future advancement. I jumped at the chance to get into my desired field,” she recalled.

Lily’s love of visual arts extends to how she spends her time outside of the office. She can often be found playing Warhammer 40,000, a tabletop war game in which players enact battles using miniature models of warriors and fighting vehicles. Lily assembles and paints the intricate plastic models herself, frequently spending hours on a single character. In 2008, she was a participant in the game’s national competition held in Chicago.

Besides playing Warhammer and other video and tabletop games, Lily is also a devoted pet parent. She recently adopted a pair of ferrets: Pabu, a butter-colored male named after the fire ferret from The Legend of Korra, and Skitter, a masked female who gets her name from an online web serial featuring a hero whose superpower is controlling animals. She also owns a cat named Ivy.

While she recognizes the impracticality of the situation, Lily wishes she could add a pet otter to her menagerie.

“I would really love to own an otter. They are like giant ferrets who love water,” she admitted, adding that she would name it Leviathan after the mythical sea creature.

Given her love of animals, it’s no surprise that Lily dreamed of being a veterinarian as a child. Also an artistically inclined youngster, it wasn’t until high school that Lily really “got into” art though, courtesy of an extremely supportive teacher, who suggested making a career in the arts.

Clearly, the advice of Lily’s art teacher was spot on. At 360 PSG, Lily is definitely valued for her graphic design skills, but we also know there’s more to Lily than the ability to create visually engaging artwork. She’s also a pro at finessing clients and delivering work that consistently exceeds expectations. And she’s an asset to her coworkers, especially those who look to her for guidance and experience. In fact, Lily has earned the nickname “Mama Bird” from her coworkers, a testament to her caring and encouraging nature. And last but certainly not least, Lily’s coworkers appreciate her in-depth movie critiques and her amazing chicken wing dip! For some more insight into Lily, check out the top 10 things to know about her:

Getting to Know Lily: