Our mission is to provide web solutions in such a way that small and mid-size companies have an affordable option, without sacrificing the quality and expertise that is usually associated with large, diverse and expensive agencies.

There are five governing principles behind every decision we make, which we believe are crucial to building a successful company for you and for our team.

"To improve is to change; to be perfect is to change often!" This quote rings particularly true in our industry, where the technology and best practices are constantly changing.

Whether it's an internal email or a service request from a client, prompt responses are crucial to exceptional communication. Even if the question can't be resolved immediately.

Do What You Say, When You Say It

It's simple, really. Set expectations and stick to the commitment you made. Our industry is plagued with over-promising and under-delivering, and we want no part of that pattern.

Show Customers A Smile Every Time

All team members are expected to provide a positive customer experience, every time. However, this value isn't just limited to interactions with our clients.

We're All On One Team

Every team member is treated with the same level of respect, responsiveness and commitment that we show our clients, regardless of position or tenure.

360 PSG was formed in 2005 when our founders were caught in the shutdown of their previous employer. The trio was concerned that their former clients' business would suffer as a result of the closure, so they self-financed a web design start-up in order to keep the websites online. They only produced three new websites that year.

360 PSG continues to launch websites for businesses that range from small start-ups to successful and developed corporations. Much of this success can be attributed to our investment in building the Fission Web System and its lighter counterpart, the turnkey 360 CMS.

As a homegrown WNY company, the team at 360 PSG believes that Buffalo is an incredible place to build a technology center (for the US and abroad). As one of the fastest growing web development firms in the Western New York region, we're working hard to shed the negative stereotypes associated with our wonderful city's past and show the nation that she is ripe for commerce! 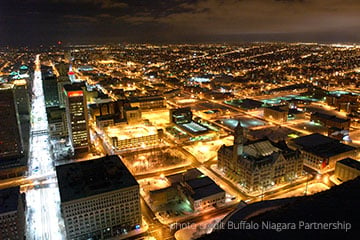