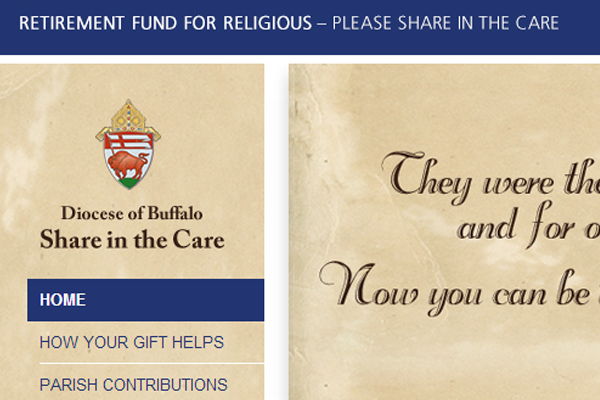 The Diocese of Buffalo recently launched its updated website www.shareinthecare.org with 360 PSG, Inc.

Share in the Care is a tax-deductible retirement fund for the religious, supporting the everyday care of thousands retired women and men who served as brothers and sisters of the church.

Share in the Care's existing website underwent a complete design conversion so that it may operate on 360 PSG's Fission Content Management System, a powerful CMS which contains built-in search engine optimization tools that have the potential to increase search engine ranking and improve visibility online.

With their new web system, utilizing technology built by 360 PSG, the Diocese's staff has the ability to create, edit, and update an unlimited number of content pages from any computer with internet access at any time. The new site also includes the ability to process donations online.

By converting their website to the Fission Web system, the Diocese now has the ability to take advantage of all the features and functionality of the Fission CMS as their retirement fund continues to grow.

Share in the Care's new site is hosted on 360 PSG's secure servers at their business class datacenter in downtown Buffalo, NY.